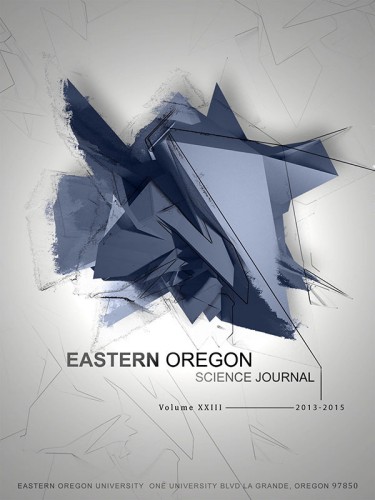 Produced by students at Eastern Oregon University, the top-scoring magazine highlights chemistry, mathematics and psychology. Alannah Jones and Kalia Gentlesnow are the editors.

“I started working for the science journal at the end of my freshman year, and it’s been one of the best experiences of my college career,” said Jones, a mathematics major from Cove.

“The annual awards earned by the journal are a perfect reflection of all the hard work that goes into it,” she added. “From interacting with students and professors, to transitioning the publication’s funding to solely donations, it’s been a fascinating learning curve to be a part of.”

Contributions from university faculty, staff and community members now serve as the journal’s single funding source. Amy Yielding, an associate professor of mathematics at EOU, is the faculty advisor for the publication.

“This is a great opportunity for individuals to be part of the continued excellence and success of the journal,” Yielding said. “We’re very grateful for the generous support we’ve received, and every donation makes a difference for the students who put a lot into this publication.”

Gentlesnow, an anthropology student from Eugene, echoed her co-editor’s sense of appreciation for the chance to help prepare the edition.

“The most rewarding part of working on the journal was learning more about the industry, as well as reading the fascinating studies written by fellow students and helping compile them into one cohesive publication,” she said.

This is the second issue to be lauded by the American Scholastic Press Association. The journal’s success is the result of a team effort between faculty and students, and it holds distinction as the first student-published, undergraduate scientific research journal in Oregon.

“All of the journal covers since 2011 have been original works from student artists,” Yielding said. “The reviewers really like that part of the publication and mention it frequently.”

Media arts major Katie Arnzen, of Summerville, designed the cover of this issue, Volume XXIII. Arnzen used 3D modeling software to create the abstract image she titled “Blueprint” as a representation of knowledge and intelligence, rather than a specific scientific branch.

Following the success of the science journal, a new Eastern Oregon Social Science Journal will be introduced this spring. Jones is staying on as editor of the inaugural edition, along with fellow student Zoe Mathias. Aaron Thornburg, assistant professor of anthropology, is the faculty advisor.

Thornburg said the forthcoming publication will be produced every other year alternate to the science journal, and will give EOU students an opportunity to publish their research and academic writings in anthropology, business, communications, economics, education, history, politics, sociology and other disciplines.