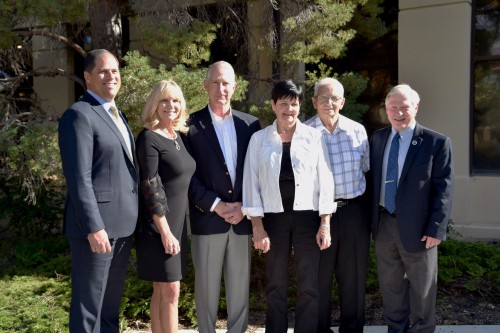 Sept. 17, 2018 LA GRANDE, Ore. –  After decades of faithfully supporting Eastern Oregon University students, alumnus Denver Ginsey has established an endowed scholarship that will continue his family’s legacy for many years to come.

At $1 million, the Jean and Denver Ginsey Scholarship is the largest gift to the EOU Foundation by a living donor in the university’s history. The endowment earnings will provide multiple scholarships for students studying in business or science, engineering, technology and math (STEM) programs.

“This gift is an incredible display of generosity that will enable EOU to expand student access, opportunity and completion,” said Tim Seydel, Vice President of for University Advancement. “Denver and his family are making an impact on EOU that will be felt for generations.”

Denver and his wife Jean, plus her two younger brothers, grew up in the Grande Ronde Valley. His love for baseball and a talent for sports in general led Ginsey from student body president at La Grande High School in the early 1940s to the U.S. Navy and back to Eastern Oregon College of Education in 1946. But his aptitude for math and science kept him in the business game long after graduation.

Ginsey played collegiate baseball and basketball at Eastern under legendary coach Bob Quinn, but science professor Ralph Badgley had the most lasting impact on him. Ginsey walked past the Badgley’s house every day after class, and when he stopped to ask about his coursework Professor Badgley always had time for his pupil.

Ginsey graduated from EOU in 1948 and, along with four other classmates, enrolled at the University of Washington. The cohort often took classes together, and when grades were posted they consistently finished in the top five. Ginsey said his and his classmates’ success was the result of Badgley’s diligent teaching during their studies in La Grande. 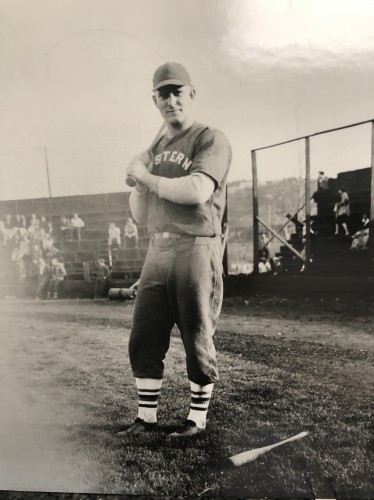 Originally planning to study electrical engineering, Ginsey switched his major and instead became the first person to graduate from UW’s business program with a B.A. in mathematics.

Armed with his degree, he went to work for Wendell Milliman Consulting Actuary, then New York Life Insurance Co., and finally the oldest insurance brokerage firm in the world and the largest that was privately owned — Johnson and Higgins. Ginsey became president of the firm’s Washington State corporation, and a senior partner of the international business.

Now 93, Ginsey has shifted his focus to the final innings of his career. He has served on both the board and senior council of the Fred Hutchinson Cancer Research Center in Seattle. His work with Boeing earned him an honorary law degree from the law firm Perkins Coie.

Their son and daughter, Dan Ginsey and Patsy Gay, attended Convocation at EOU on Sept. 17, where President Tom Insko recognized the Ginsey family’s contribution to the university.

“My father has given to EOU annually for many years, but we found out just how much it meant to him about five years ago when he said he wanted to do something more,” Dan Ginsey said. “He and all of our family are excited to see this endowment affect young minds in amazing ways — minds that may not have had the opportunity without this program.”

Denver’s brother-in-law and sister-in-law Jim and Char Evans of La Grande, also attended the event. Dan said his father and mother, who passed away in September 2011, have always been passionate about providing education for their three children and six grandchildren, and their generosity has expanded to reach new generations.

“My hope is that this is the beginning of many more to come,” EOU President Tom Insko said. “We have such a compelling story here at Eastern, and the EOU Foundation is a critical part of achieving our mission: to provide access to excellence for every student.”