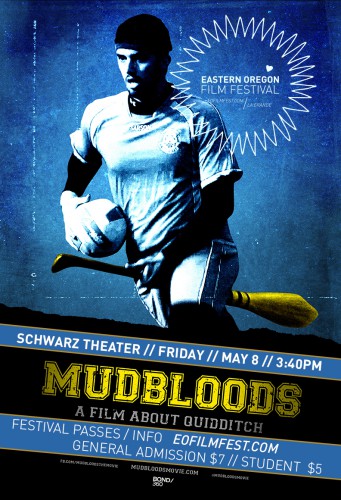 Local community and student filmmakers showcase their recent and in-progress projects at 1:10 p.m. in EOU’s Schwarz Theatre in Loso Hall.  Tim Mustoe’s documentary, “THE PEOPLE BEHIND THE PRINT,” about The La Grande Observer, will be featured. In addition, filmmakers Will Bowman, Brent Clapp, Chuck Peters, Dylan Lutcher, Fernando Moreno and others will showcase their films. The showing will be followed by a panel with the filmmakers about film and media production at EOU and in the Grande Ronde Valley. The event is hosted by EOU’s theater club in partnership with the Eastern Oregon Film Festival.

Later in the afternoon, catch a screening of “MUDBLOODS,” a film about quidditch – the fictional competition featured in the “Harry Potter” series that has been transformed into a physically demanding, real-life sport. “MUDBLOODS” follows the resilient underdogs of the UCLA Quidditch team as they make their way to the Fifth Annual Quidditch World Cup in New York City.

Other festival events will be hosted at The Art Center, The Granada and The Liberty Theatre. A special Friday outdoor music event will be held in the newly-renovated parking lot at Benchwarmer’s Pub & Grill on Depot Street.

“EOFF’s musical line-up is, in a word, unprecedented. From heart-wrecking soloists to mathematical pop-rock wizardry, to spit-shined and callus-handed country blues, these tunes you’re invited to experience are nothing short of a candid reflection of what we stand for. Here are a handful of the region’s finest, friendliest, and funkiest—so lace ‘em up tight folks, this one is for the ages.”
— Gregory Rawlins, EOFF music programmer