Celebrating Homecoming on campus and in the community

LA GRANDE, Ore. (EOU) – Eastern Oregon University’s 2015 Homecoming celebration is Thursday, Oct. 15 through Saturday, Oct. 17 with events on campus and in the community.

Festivities begin with the annual Choirs of the Valley concert at 7 p.m. Thursday in McKenzie Theatre in Loso Hall. Admission is free with donations to the EOU Foundation music scholarship funds accepted at the door.

Open for viewing Thursday through Saturday is the exhibition “Homecoming” in Nightingale Gallery in Loso Hall.

The shotgun start is at 9:30 and the cost to participate is $75 per person or $300 per four-person team, with all profits supporting scholarships for student-athletes. A game package that includes entry into the putting contest, hole-in-one contest and mulligans is also available for $25 per person.

The annual Homecoming Parade starts at 5 p.m. Friday, with lineup at 4:15 on the corner of 4th Street and Jefferson Avenue. Entries proceed on Adams Avenue through downtown to Hemlock Street.

Parade Grand Marshal Vern Bean, Ph.D., is also EOU’s 2015 Distinguished Alumnus. Bean grew up in La Grande, attended Ackerman Elementary School and later Eastern Oregon College. He transferred to Brigham Young University where he completed his bachelor’s degree and a master’s of science and doctor of philosophy in physics.

He will be giving a free, public presentation at 2 p.m. Friday in Huber Auditorium in Badgley Hall.

During his time at Eastern, Bean ran high hurdles, served on the student council, was a protégé and lab assistant of Ralph Emerson Badgley, and built a 14-foot high Homecoming bonfire that burned for three days.

His professional contributions to the fields of missile defense, explosives and fuels are many and noteworthy, particularly the tools he designed, built and produced to measure solids, liquids and gases at high pressures. His work has taken him around the world and he received the U.S. Department of Commerce Bronze Medal for Superior Federal Service and holds a patent for a Department of Energy device.

Bean retired in 1999 and lives in Frederick, Md., where he has served his local community as a scoutmaster, chief judge of the election precinct and through his church.

Following the parade at 6:30 p.m. is the Alumni Honors and Athletic Hall of Fame Reception and Ceremony in the Gilbert Center, where Bean and other recipients of this year’s awards will be honored.

Dale DeLong of Island City is the recipient of the Dixie Lund Service Award. Longtime mayor of Island City, he is an Air Force veteran, retired Boise Cascade employee and volunteer for numerous community and university groups.

Elizabeth Markworth of Foothill Ranch, Calif., is EOU’s Honorary Alumna. She attended EOU from 1960-62 and is the vice president and relationship manager in the Fiduciary Business Services Department of First American Trust.

Athletic Hall of Fame inductees are: Terry Shines of Pasco, baseball; Nick Hannah of Wenatchee, football; Ron Shimizu of Pukalani, Hawaii, football; and the members of the 1980 football team.

After the sun goes down and the ceremony concludes, Eastern Student Entertainment will present a free showing of the movie “Remember the Titans” at 8 p.m. on the lawn of the intramural field on campus. 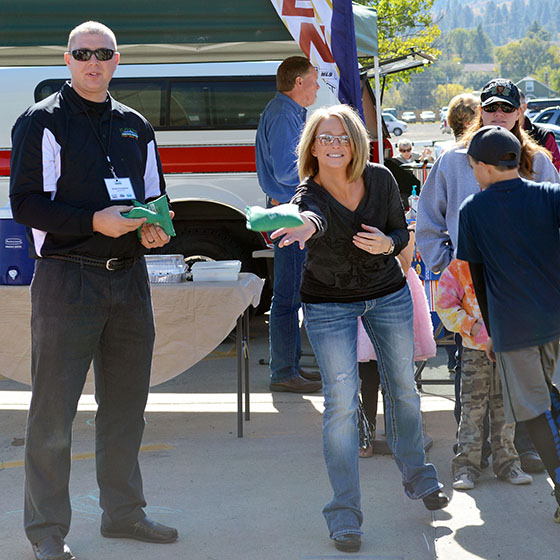 Football fans enjoying a game of beanbag toss in the John J. Howard and Associates Tailgate Zone before kick-off.

Saturday’s events start off early with the third annual Homecoming Run at 7:30 a.m. sponsored by Edward Jones – Shawn K. Mangum. The 5/10K and one-mile run/walk features routes through the heart of campus and downtown. Pre-registration is $10 or $15 the day of the event.

The Alumni Association will hold its annual breakfast meeting at 9 a.m. in the Gilbert Center before a game of fast pitch softball starts at 10 at Peggy Anderson Field.

At 10:30 a.m., football fans will begin gearing up in the John J. Howard & Associates Tailgate Zone in the parking lot at 6th St. and H Ave. Vendors are welcome to sell food and beverages in the tailgate zone.

The Mountaineers will face the University of Montana Western at 1 p.m. in Community Stadium. A 5th Quarter Celebration is at 4 p.m. in the lobby of Quinn Coliseum, sponsored by U.S. Cellular.

A jazz tribute concert to Duke Ellington presented by Matt Cooper starts at 8 p.m. Saturday in Groth Recital Hall in Loso Hall, Room 126. Admission is free with donations accepted at the door to benefit music scholarships.

Cooper, a pianist and professor of music at EOU, will perform solo and in small-group numbers assisted by fellow music faculty and members of the northeast Oregon musical community. Early 1920’s stride piano solos, classic hits as well as avant-garde compositions from the 30’s through the 50’s are on the program, in addition to selections from the many suites and extended works by Ellington and his close associate Billy Strayhorn from the 50’s and 60’s.

Performers include Sharon Porter on vocals, Peter Wordelman on trumpet, Greg Johnson on tenor sax and clarinet, John McKinnon on trumpet and trombone, Cooper on piano, Luke McKern on bass and Mark Emerson on drums.

Cooper is the author of “Ellington as Pianist: A Study in Styles” (The College Music Society, 2013). The book features copious transcriptions of Ellington’s recorded piano work and will be available to purchase at the event.

Comedian Adam Grabowski has the last laugh of the evening when he takes the stage at 9 in the Gilbert Center. EOU students receive one free ticket each. A limited number of general admission tickets are available to purchase for $5 in the Hoke Union Building, Room 216. Eastern Student Entertainment is sponsoring the show.

For more information and to register for events visit www.eou.edu/alumni/homecoming, call University Advancement at 541-962-3740 or e-mail alumni@eou.edu.