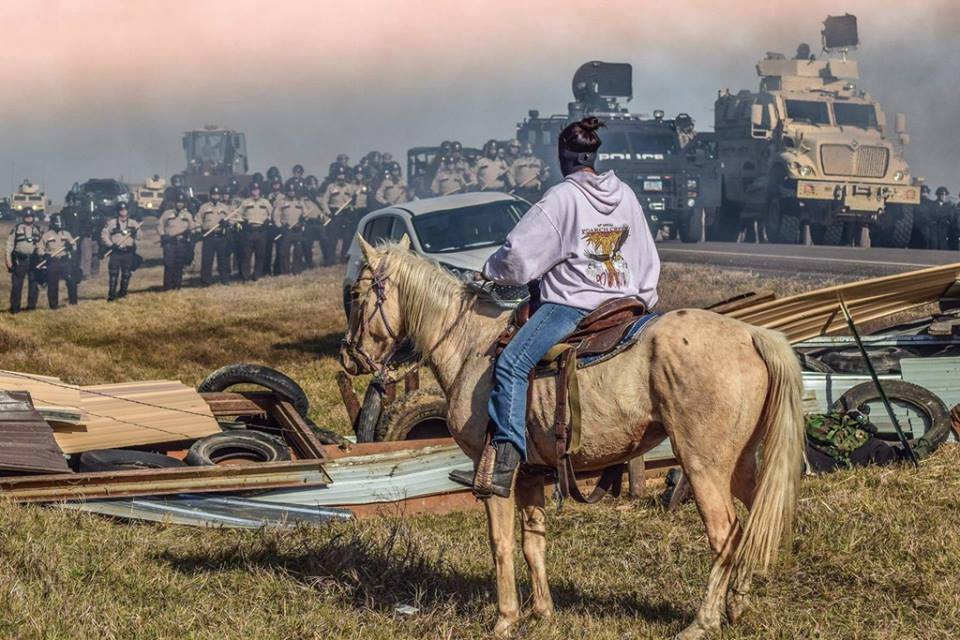 In early 2016, Energy Transfer Partners finalized plans for the Dakota Access Pipeline, beginning construction that June. This underground pipeline would be used to transport crude from the Bakken oil shale formation in North Dakota over 1,000 miles, passing through four states to its destination in Illinois. The route planners neglected to consider that the finished pipeline would risk catastrophic damage to Native American people, sacred cultural sites, and the landscape. The proposed pipeline route would run under Lake Oahe, a lake bordering the Standing Rock Reservation. If oil were to spill from the pipeline it would flow downstream to the reservation, tainting the water that they drink and use to irrigate their crops. The invasive construction process would damage Native American burial grounds and other sites of cultural importance. Controversy over the project lead to the largest gathering of Native American groups in over 100 years at the Oceti Oyate Camp (formerly known as Oceti Sakowin) on the site where the Cannonball River joins the waters of the Missouri.

Despite the great significance of the events at Standing Rock mainstream media outlets neglected to send journalists to document the protest during its earliest phase, and then only provided minimal coverage. Independent groups responded with their own social media coverage, branding campaigns on Twitter, Facebook, and Instagram with hashtags such as #NoDAPL, #StandWithStandingRock, and #RezpectOurWater, among many others. Photographers and photojournalists stepped in where the mainstream media failed. These photographers helped the protest movement by shining light on inhumane police tactics, the daily rituals of the Oceti Oyate Camp, and the cultural significance of the land and its people. 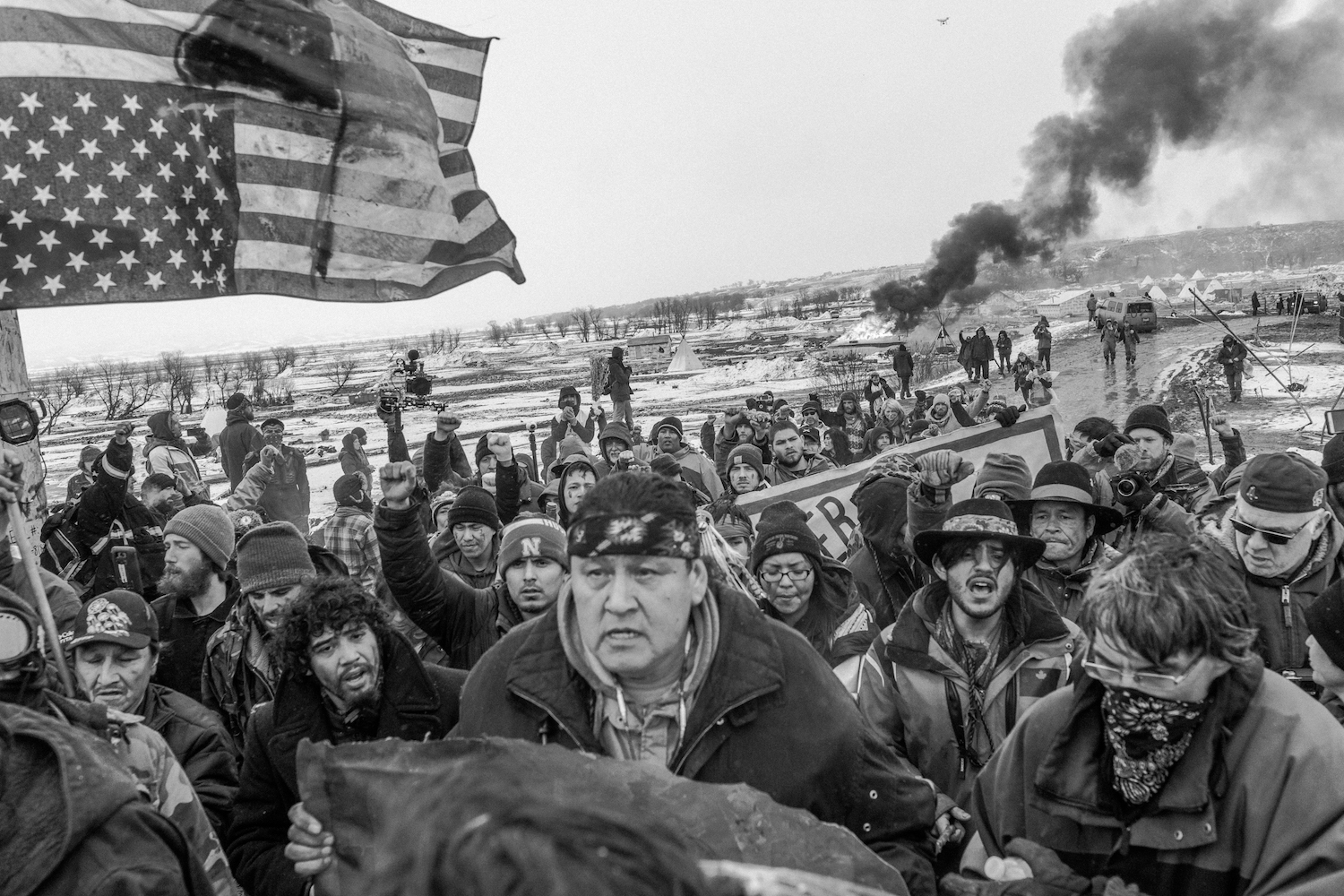 One of these photographers was Josué Rivas, who spent seven months at Standing Rock during the protests to gather pictures for his photobook Standing Strong. The book contains black and white photographs of the events that transpired at Standing Rock and the people that were fighting for their land and culture. Josué’s goal with this project was to document the stories of the people who traveled to Standing Rock, showing the cultural significance of this event from the lens of a fellow Indigenous person. 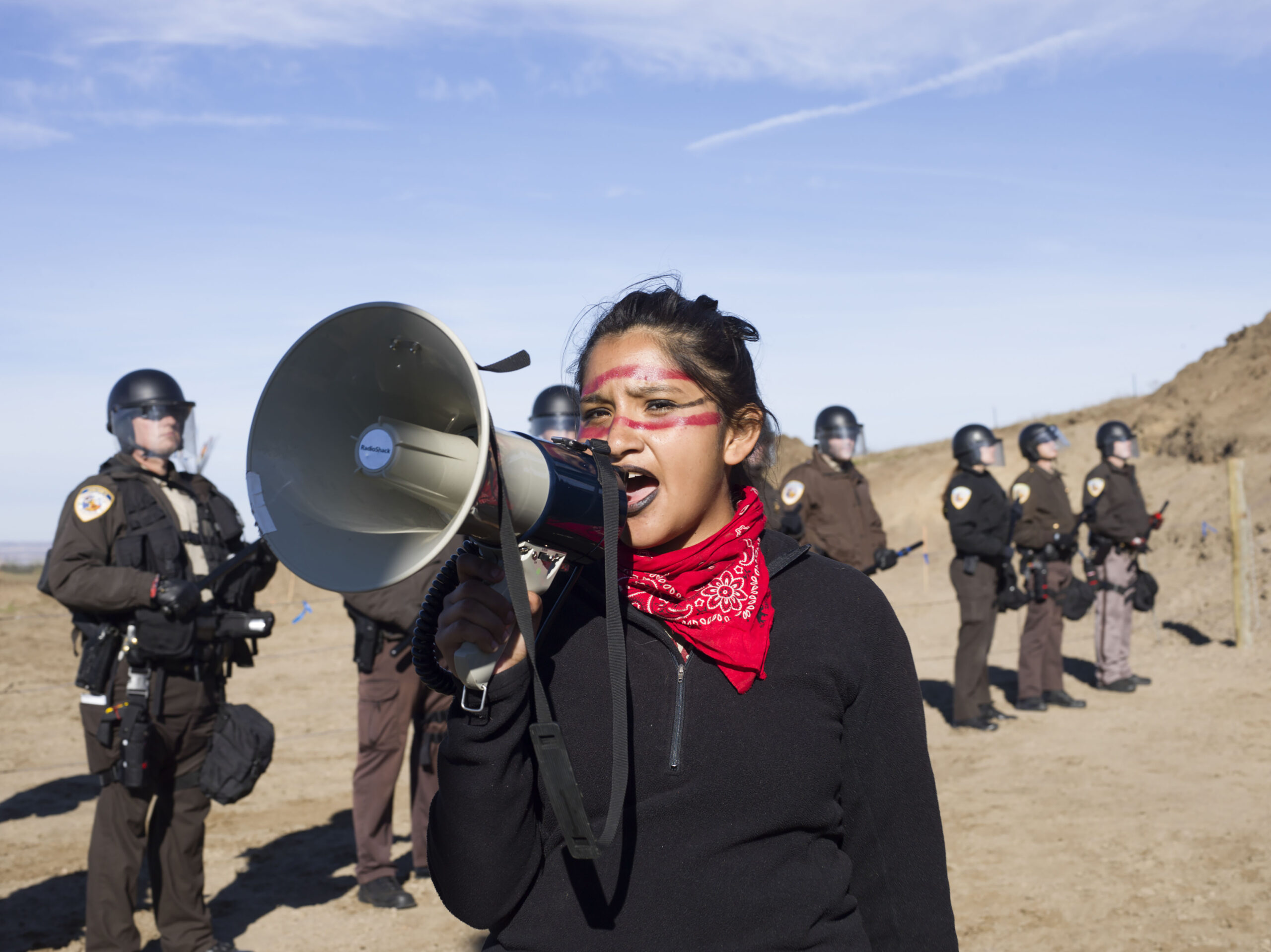 Alessandra Sanguinetti covered the event in a similar way through her project, Portraits of Protest: The Women of Standing Rock. As the name suggests, this series of photographs portrays female Water Protectors, focusing on their strength, leadership, and connection to the land. The Native groups Alessandra photographed are all primarily matriarchal; these groups have an intimate ancestral connection to the land, referring to it with terms like “Grandmother Earth.” Alessandra’s pictures portray strong women standing up for their people, proudly displaying their heritage by painting their faces, wearing traditional Indigenous headdresses, and displaying tribal symbols on clothing or flags. 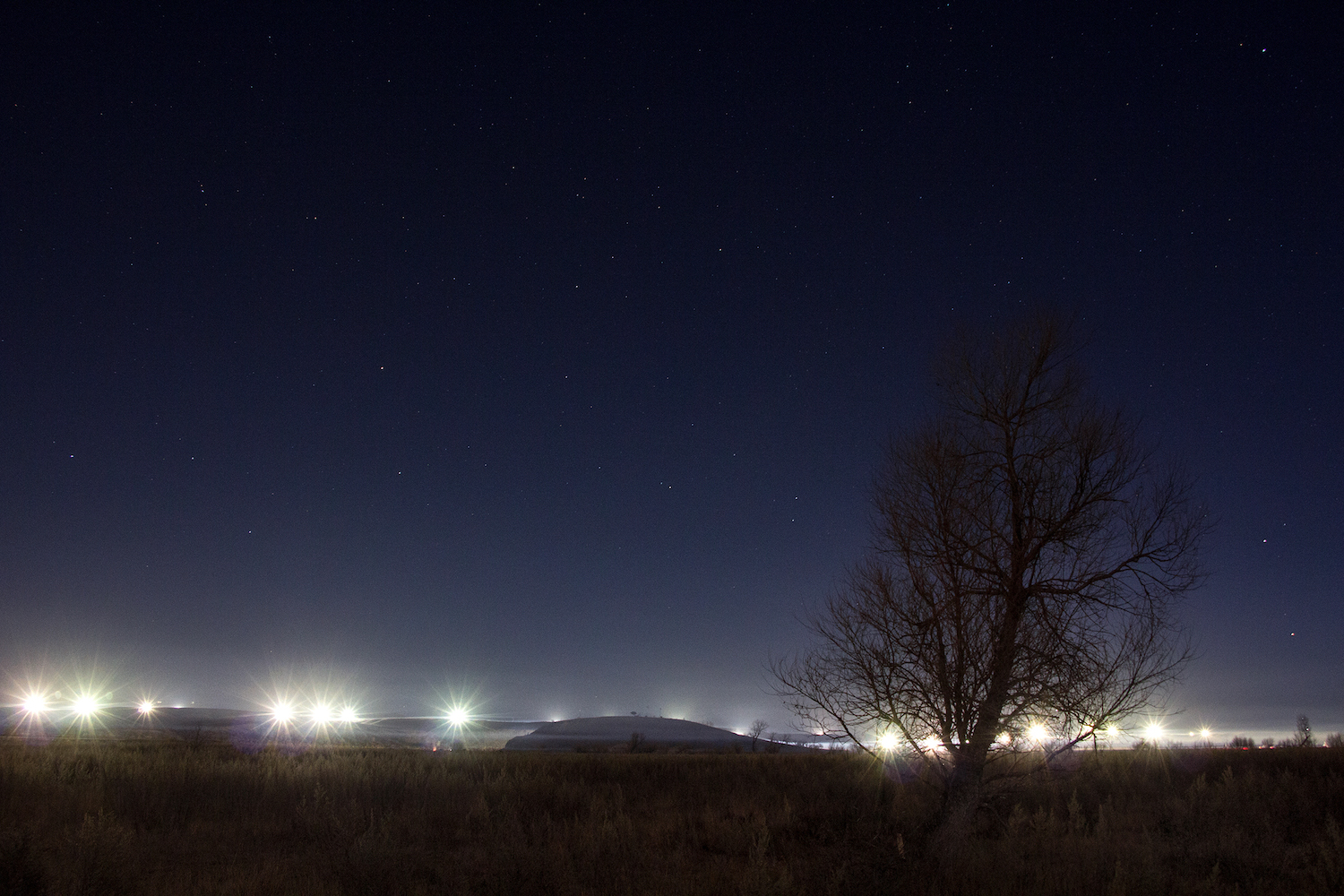 Many of the photographers present were primarily trying to spread awareness of the events that were transpiring at Standing Rock, such as Joe Whittle , who traveled to the Oceti Sakowin camp on assignment for The Guardian. Joe felt a strong desire to help the people of Standing Rock because he is an enrolled member of the Caddo Nation of Oklahoma and a descendant member of the Delaware Nation of Oklahoma. Joe’s pictures and accounts of the protests are both inspiring and shocking; he showed the proud culture of the Indigenous people occupying the proposed construction route and contrasted it against the horrifying ways Water Protectors were treated by the police. One specific photo depicts an empty field of grass with a single tree shot at night. In the distance, security flood lights shine at the camera, showing the contrast between the serene natural landscape and the harsh industrial light.

The contrast between native culture and the encroaching industrial pipeline was a popular subject for photographers, and Ryan Vizzions captured this contrast in his photo book, No Spiritual Surrender. One of the most popular photographs from this book is called Defend the Sacred: Standing Rock, Cannon Ball, North Dakota, 2016. The picture portrays Mega Mae Plenty Chief of the Lakota Sioux on horseback standing before a short wall of scrap materials and tires. On the other side of the wall is a line of police officers and armored vehicles; many of the officers hold batons in their hands and seem to be beating them against their palms as if preparing a charge. The picture clearly represents the divide between Indigenous culture and the multibillion dollar company trying to disregard their culture for profit: a literal wall separates the two groups, one Native American on horseback standing up for their culture is opposed by a sea of armed white police officers. The sentiment of the image recalls the atrocities that occurred during European colonization of America, and which continue today. 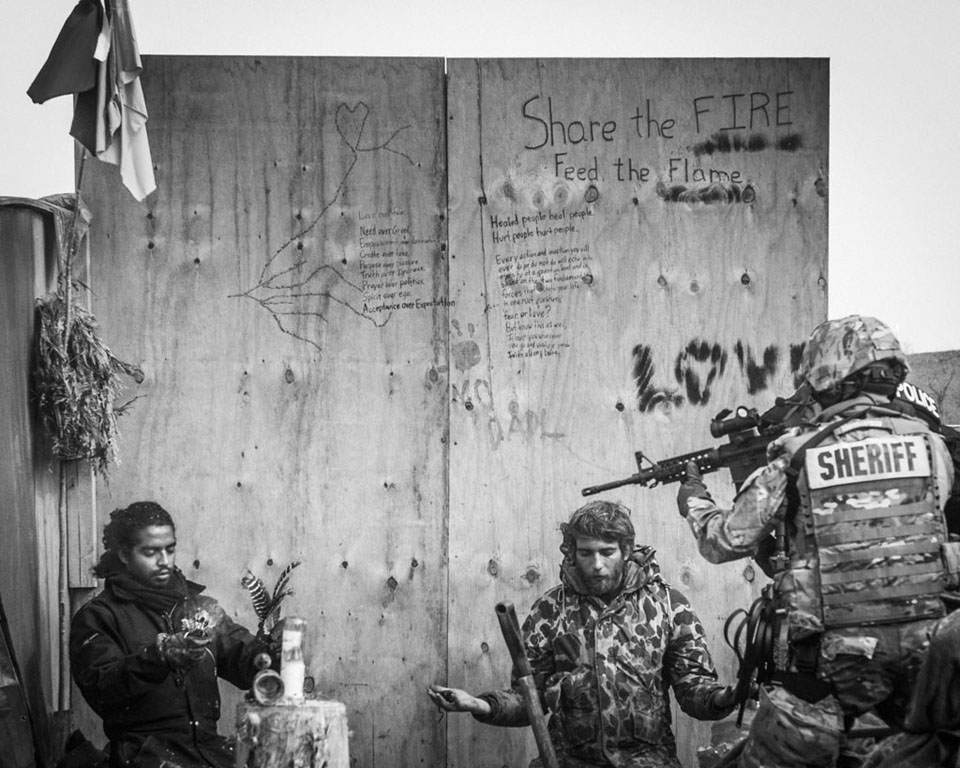 The officers trying to break up the protest didn’t take kindly to these photojournalists exposing what was going on. Many protestors and photographers were detained and arrested and one such photographer was Tracie Williams. Tracie took a series of striking photographs during the final three weeks at the Oceti Oyate Camp before police evicted the Water Protectors on February 23, 2017. One image documents camouflaged snipers perched on the roofs of vehicles and officers charging into the camp brandishing automatic weapons. In another, a sheriff aims an AR-15 assault rifle at a pair of peaceful protestors engaged in ceremony. Protest slogans and mantras are scrawled on the makeshift plywood wall behind them, including phrases like “Healed people, heal people / Hurt people, hurt people.” For taking this picture, showing the world how Native Americans and their allies were being treated by the government for trying to protect their land and heritage, Tracie was charged with obstruction of government function and arrested. Fortunately, her case was dismissed with the legal aid of the National Press Photographers Association.

Cases like Tracie’s are why photographers and independent journalists can make such a remarkable impact on society, however, their First Amendment freedoms are under assault. Even if the mainstream media sees something as ‘not newsworthy’ or ‘too controversial,’ and even if the government is arresting people for peaceful protest or for trying to get the word out, anyone with a camera and a good heart can still show the rest of the world what’s really happening and make a difference by calling people to action.

Although the Water Protectors were evicted from the Oceti Oyate camp in 2017, the struggle continues in the bayous of Louisiana where photojournalist Joe Whittle and others document the devastating path of this mythic black serpent of Lakota lore, the pipeline.