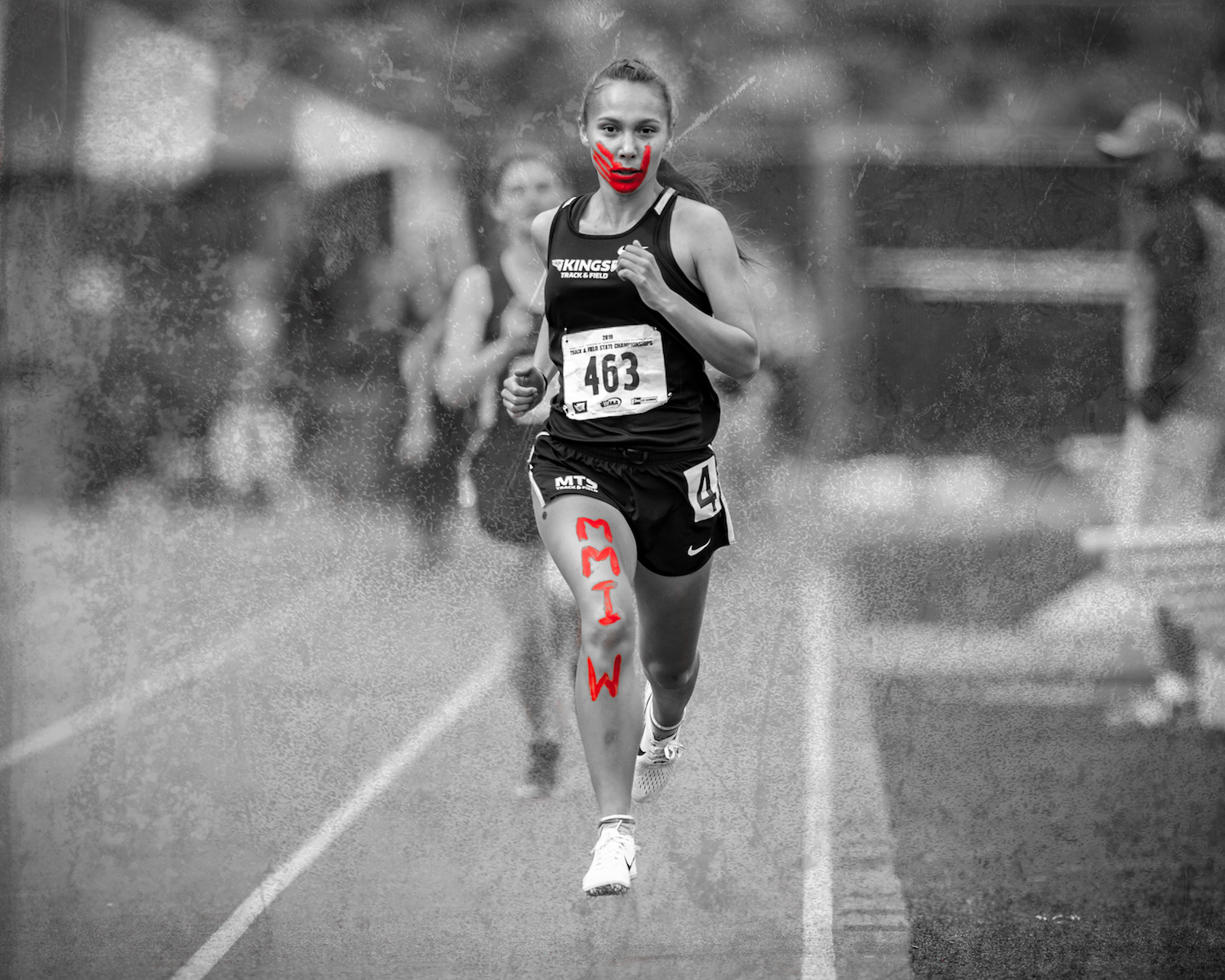 Walking into the Nightingale Gallery’s current exhibition, Imaging Indigenous Resistance, you will be confronted with a series of monumental wall displays, each with something to catch your eye. To the left, Cannupa Hanska Luger’s Mirror Shield Project (2016/2020) reflects the light of the room; to the right, a brightly colored photograph by Hawaiian videographer Valen Ahlo fills an entire wall. In the center, a selection of red dresses hang from the ceiling, swaying in response to the bustle of workshop participants. Behind the dresses, the wall is covered in dozens of red handprints left by the gallery’s visitors. Though visually compelling for its abstract qualities, this display memorializes an ongoing tragedy everyone should know about, an epidemic of Murdered and Missing Indigenous Women, abbreviated as MMIW.

This 30-foot mural and red dress display strives to communicate the scale of the crisis. According to a study done in 2016 by the Urban Indian Health Institute, 5,712 Indigenous women went missing that year in the US. Of those 5,712, only 116 were logged by the Department of Justice’s missing persons database. That same study surveyed 72 law enforcement agencies and of those surveyed only 56% provided any data in response to public information requests pertaining to missing Indigenous women. Of that 56%, 25% provided incomplete information. So what does this mean, exactly? Indigenous women in some communities face murder rates 10 times the national average, and no one is talking about it. In the previously mentioned study, only 25% of the cases actually documented received any media coverage at all.

Why is this happening? In an interview with AP News, Ivan McDonald of the Blackfoot Nation said “It boils down to racism. You could sort of tie it into poverty or drug use or some of those factors… but the Federal Government doesn’t really give a crap at the end of the day. I can’t think of a single person I know who doesn’t have some sort of experience.” Ivan is more than correct about the issue being widespread. Even our own little community has been affected. In October of 1999, 45 year old Leona LeClair Kinsey, a member of the Puyallup Tribe, vanished right here in La Grande. Kinsey’s daughter, Carolyn DeFord, says there was no search party. She made and hung up her own missing posters. DeFord believes her mother was a victim of foul play at the hands of a man she was supposed to meet that day, who was reportedly a notorious drug dealer. 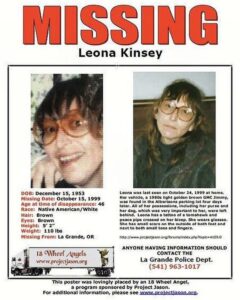 DeFord had become concerned when she could not get ahold of her mother after she left to go shopping. Her car was later found in the parking lot of Albertsons, yet her purse, pets, and belongings were still at home. I had the opportunity to speak with Carolyn and she had nothing but good things to say about both her mother and the town of La Grande. “We made La Grande [our] home my whole life until I was 21. She loved the mountains, outdoors, hunting, fishing, mushrooming, and all of the things that make La Grande so charming. It’s been too long overlooking the issue of MMIW in Eastern Oregon,” she told me.

DeFord searched vigorously for her mother on her own for many years. A memorial was held in her honor ten years after her disappearance, and DeFord continues to be an advocate for Missing and Murdered Indigenous Women.

When a tragedy like this occurs on tribal lands, Tribal Police and investigators from the Federal Bureau of Indian Affairs are in charge of the investigation, however, the FBI will only investigate crimes under certain conditions. The US Department of Justice prosecutes major felonies like murder, kidnapping, or rape if there is ample evidence. Overlapping authorities and laws create a confusing jurisdictional maze and often it is difficult to know who to report to and where to go when a loved one goes missing. Reservation police are often spread thin and not given the resources necessary to handle difficult cases. For this reason, it has been argued, predators choose to pray on Indigenous women knowing their chances of going unnoticed are greatly increased.

So what do the red dresses and handprints have to do with all this? Both motifs are creative strategies developed by grassroots activists, designed to capture the public’s attention and raise awareness about the MMIW epidemic. In 2010, Canadian Métis artist Jaime Black staged her REDress Project on the National Mall in Washington, D.C., an array of 400 dresses donated by the public in honor of victims. The REDress Project has since taken on a life of its own through viral social media activism, spawning similar projects in communities and on university campuses across the US and Canada. The dresses in this exhibition were collected from community members by the EOU Native American Program in November, 2019 and signal the urgency of this issue in Eastern Oregon.

The above portrait of Muckleshoot Tribal School athlete Rosalie Fish by photographer Alex Flett illustrates the creative use of the handprint iconography. Here the runner has applied the handprint over her mouth to symbolize the victims’ silence. For both the red dress campaigns and handprint portraits and selfies like this one, red is believed by many Indigenous groups to be the only color spirits can see, a means of communion with the missing.

This art installation and others like it are meant to make people ask questions. The color red is loud, vibrant, and draws attention. It is a color meant to help give these women their voices back. Spreading awareness will not solve this problem, but it’s a great start.